The eagle was fabricated by Hempel Sheet Metal Works / With Justin Wittwer the main designer. The inside frame is made of stainless steel. The feathers are stainless steel wrapped in copper with some aluminum. The sculpture was started in the spring of "07. Justin & others worked on it between their regular jobs at Hemple. He estimated anywhere between 700 to 600 man-hours to complete the eagle sculpture. It was fabricate to originally go on Hempel's building on South 13th street. At that time the cost of copper at the scrape yards were high. People were and still are stealing copper from everywhere. They decided that it would not be a good idea to have it outside.

Several people heard of the sculpture, the 101st airborne "flying eagles" heard about the eagle and wanted to purchase the sculpture. They could not raise the funds. Henry Doorly Zoo also looked at it. The Kiewit Foundation heard about the eagle and raised funds for the eagle. At first they were going to put it up in South Omaha at 24th & N St. on a 60ft pole outside. The Eagle is the national bird of Mexico. But again it was decided not to install it outside. The Kiewit foundation had discussions with the Qwest Center and decided to put there because it would be inside the Qwest building. Kiewit & Qwest contacted us to help erect the eagle between the 2nd & 3rd floor. This was back in June "09" Rico Caruso, Bob Akers & Les Meisner were Davis Erection crew that set the Eagle at the Qwest Center Late Oct. "09" The Eagle weighed about 500 lbs. with a wingspan of about 9 ft. and 6 ft. tall.

Kiewit & the Qwest center were very happy with our pre-job planning and our crew's work. If you are down at the Qwest Center take a look at the eagle. It is between the two escalators that go up to the upper level. Davis Erection also set all of the sculptures outside and the lighted spheres inside of the Qwest center. 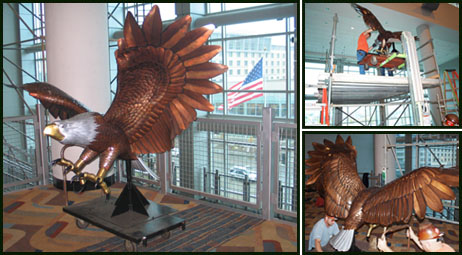